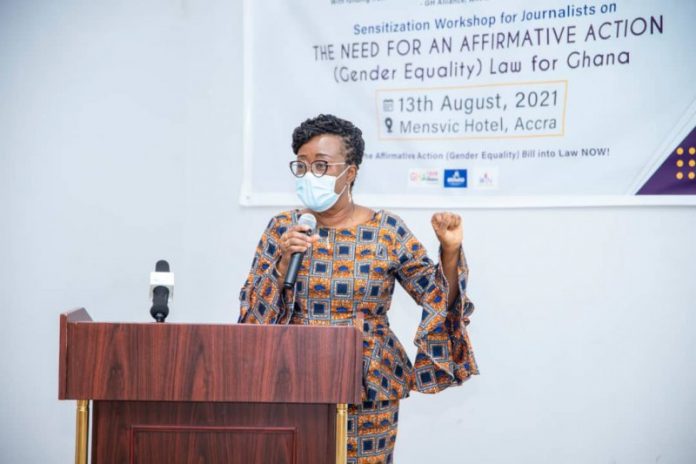 “We may hold different views about women’s rights, gender equality, and women’s inclusion in public life but what is very clear is that without the inclusion of women in national development there would be no sustainable development,” she said.

Mrs. Harrison made the call during a training programme in Accra for journalists by the AABill Coalition on the need for an Affirmative Action (Gender Equality) law for Ghana and to solicit their support and advocacy in its passage.

It was with support from the Netherlands Embassy through the Equal Rights and Opportunities for Women Project (EROP) being implemented by the SRHR Alliance for Young People, African Centre for Human Rights and Sustainable Development, and Women in Need.

Mrs. Harrison said many post-2015 studies and reviews showed that countries that performed poorly in the implementation of the Millennium Development Goals did so because of their failure to pay attention to gender equality.

She said if Ghana should pay more attention to gender equality the country would be heading towards achieving the Sustainable Development Goals (SGDs).

The outcome of Ghana’s 2020 elections showed that only 40 women managed to get into the 275-member Parliament, a situation which demonstrated the persistence of gender inequality in Ghana, she said.

“Elections in Ghana have been free and fair but not fair to women in general as only 40 out of the 275-member Parliament are women. Leadership must be interested in pushing for a higher number of women into public life and governance in general as women’s low representation negatively affects national development,’’ Mrs. Harrison said.

She said the Affirmative Action Bill was in line with Article 17(4) of the 1992 Constitution and in compliance with Ghana’s international human rights obligations, with key ones including the SGDs – particularly Goal Five, the United Nations Convention on the Elimination of all Forms of Discrimination against Women (CEDAW), Beijing Declaration, and the African Union Agenda 2063.

Madam Sheila Minkah-Premo, the Convener of the AABill Coalition, said the gendered division of labour in the home, patriarchal and patrimonial systems, negative socio-cultural practices and beliefs, education and religious barriers, and the nature of party politics in Ghana contributed to discrimination against women.

She said the Affirmative Action Law was, therefore, needed to remedy the imbalance that existed between men and women in the country and to give both genders equal representation in the public sphere.

Madam Minkah-Premo said the Bill sought to promote a progressive increase in the active participation of women in public life from a minimum of 30 percent to parity of 50 percent by 2030 in line with the requirements of the SDGs.

She said Ghana was far behind in achieving gender equality with regard to leadership in governance and public and private life and called on journalists to help make the problem of gender inequality an urgent issue that must be addressed by the Government.

Data from Afri-Dev.Info indicate that Rwanda has the highest of 61.3 percent of women representation in Parliament, Senegal 43 percent, and Ghana 14. 6 percent, she said, adding that Ghana could take a cue from these leading countries.

The AABill Coalition was set up in September 2019 to enable members of Civil Society interested in seeing the passage of an Affirmative Action Law to work together to achieve that goal.

Affirmative Action is the act of supporting or recommending a course of action to remedy an imbalance, recognizing the historical wrongs, and making room for remedial action to be undertaken to remedy the wrong.

The AABill, therefore, seeks to provide an accountability framework for gender equality and the empowerment of women aimed at providing both the executive and legislative yardstick for measuring the commitment and progress of the country towards achieving gender equality.